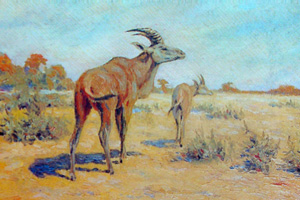 New showcase at the museum

The National Museum of Natural History, Sofia and Foundation 'Asen Nikolov' are pleased to invite you to the official opening of the latest showcase at the museum - nilgau antelope and its ancient relatives on 23 March 2012, at 18:00 in Mammals Hall.

The extremely valuable exhibit, a whole specimen of the Asian nilgai antelope (Boselaphus tragocamelus), is from Hindustan Peninsula. The specimen is of an individual presented as a gift for the 100th anniversary of the Sofia Zoo (1988) and more than ten years after the death of the animal the skin was stored in the museum. The installation is made possible by the mastership of taxidermists Panayot Dimitrov and Martin Martinov.

The project is funded by the Foundation 'Asen Nikolov'.