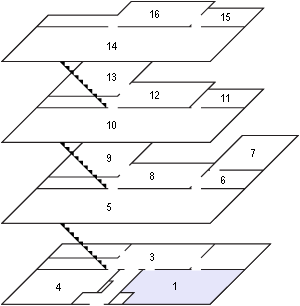 About 1300 mineral samples are exhibited in the first hall in fifteen vertical glass-cases. They are arranged in systematic order:

In the glass-cases ‘Sulphides and sulphosalts’ over 300 minerals are shown. They are compounds of metals and sulphur, selenium, tellurium, arsenic and (rarely) antimony or bismuth.

Sulphides are relatively simple compounds. Commonly they are opaque and have metallic lustre, high specific gravity and middle to low hardness. The largest sulphide deposits are formed through hydrothermal precipitation. Large part of the minerals of this class are important ores for obtaining base metals such as cooper, zinc, lead, gold, silver, mercury, etc. Pyrite is the main source in extraction of the sulphur acid.

In the glass-case ‘Oxides and hydroxides’ minerals that are compounds of oxygen and hydroxide groups with metals and rarely with semimetals are presented. Oxygen is the most ubiquitous element in the lithosphere and plays an important role in the upper lithosphere where the largest part of the oxide minerals have been formed. The water is dominant oxide that has an important role in the oxidative processes. There are more than 250 oxide minerals of relatively simple chemical composition with one, two and rarely more metals taking part in their composition. Most of the oxide and hydroxide minerals are formed as a result of reworking the primary minerals under the influence of vadose solutions. The huge bauxite deposits are examples of products like these. On the contrary, the biggest pegmatite and magmatic deposits are formed in depth. Oxides of iron, tantalum, titan, thorium, beryllium, etc. occur in these deposits. They rarely accumulate in industrial concentrations. Spectacular transparent minerals like gemstones often occur in these deposits. Some oxides rarely have been formed in a hydrothermal environment where they generate industrial concentrations and deposits of metals: iron, titanium, nickel, etc.

In the glass-case ‘Halogenides’ minerals, which are compounds of potassium, sodium, calcium, magnesium, and other metals with chlorine, bromine, fluorine, and iodine are shown. Most of them are simple chemical compounds with one metal. Their various forms, colours, opacity and transparency are impressive. There are very important minerals. Raw materials from that class are used in the chemical, metallurgic, optic and others industries (halite, fluorite).

In six glass-cases ‘Silicates’ the main minerals that build up to 90% of the lithosphere are presented. Silicate minerals are over 500 and they are the main components in the rocks (quartz, feldspars, amphiboles, pyroxenes, olivine, mica, etc.). Large part of non-metallic mineral deposits belongs to this class — asbestos, kaolin, micas, and feldspars. Some of the silicates have precious or decorative quality — varieties of quartz (morion, amethyst, citrine etc.), opal, agate, chalcedony, nephrite, lazurite, topaz, amazonite, aquamarine, emerald, garnet, kunzite, tourmaline, etc.

In the glass-case ‘Borates, phosphates, arsenates and vanadates’ minerals, which are salts of boric, phosphoric, arsenic and vanadic acids are presented. Their number is about 300 but their occurrence in the lithosphere is rare. Most of the minerals in this class are products of weathering processes. The borates usually precipitate in closed basins. Apatite (CaPO4) is the most widespread mineral of this class, successfully used in the chemical industry and agriculture.

In glass-case ‘Tungsrates, molybdates and sulphates’ the minerals of the three classes are exhibited. The main minerals that are sources of tungsten and molybdenum (wolframite, molybdenite, sheelite) belong to the first two classes. There are 130 minerals in class ‘Sulphates’, which are salts of the sulphur acid. The minerals of this class display low symmetry and hardness. Except of barite, which has mainly a hydrothermal origin, almost all of the minerals are formed in weathering conditions, close to the surface or in huge water basins.

Glass-case ‘Carbonates’. Minerals, which are salts of the carbonic acids and sodium, calcium, magnesium, zinc, lead, cooper, barium, rare earth elements are presented. All the carbonates are soluble in hydrochloric acid and some of them in water. They crystallise in low symmetry forms. Carbonates are most commonly found in the oxidised zone of hydrothermal deposits and water basins. The application of the minerals of this class is various: raw materials in obtaining of some metals; in the chemical and optical industries, etc.

The largest collection of new minerals (holotypes) in Bulgaria is presented in the wall-cases. They have Bulgarian names:

Part of the first mineralogical collection that has been received in the museum in 1902 is exposed in the hall.